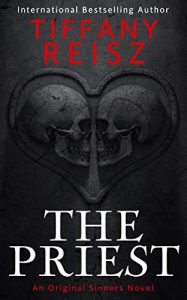 Three steps forward, two steps back.
The Priest was on its way to be my favorite of Tiffany Reisz’s The Original Sinners series. The characters are starting anew in New Orleans after leaving New York City. The story opens with Soren gone, this is not unexpected to the regular reader, new readers might be puzzled. Nora has gained a dog and the pair seem to be thriving together, no small feat for a woman who never even wanted the responsibility of a plant. Kingsley and Juliette are close to the birth of child number two.

And then the Priest is found dead. And then Nora is pulled into the mystery. Like I said, the Priest was on its way. I liked the new character of Cyrus, a local private detective, and I thought the mystery of what happened to Father Ike somewhat thin but still interesting. Eleanor is thirty-eight in this installment and is at her most likable. She seems to be past trying to seduce every guy who sparks her interest and she and Kingsley are supportive friends. She is helping paint the coming baby’s nursery, you’re welcome Juliette, and appears to be a doting aunt to little Celeste.  As the setting is New Orleans, the reader also gets a bit of the quirky flavor of the city via the architecture and food.

Having fun? Yes, we are. Then ‘it’ happens. Sometimes in a book I come to a passage that makes me want to write an extra paragraph in the book myself. This time it is a brutally painful misery stick scene between Eleanor and Soren. I know, I know, consenting adults. Still, years ago, in the book The Saint, Soren says, he can “still enjoy himself without torturing” Eleanor. He also says, “I would never do anything to you that you did not want to do.” For her part, a young Eleanor merely assures Soren she “can take it.” Ah, youth.  But clearly Eleanor is being tortured here. Clearly this is something she doesn’t want. She describes it as hurting worse than being sliced open by a knife that had been sitting in a red-hot fire. She feels she may pass out. She verbalizes that she hates these acts when they are done.

So, it’s “two steps back” in my opinion and a major disruption for readers of the series. In the past we learn that Soren can be himself with Eleanor. Why? Because he trusts Eleanor to keep them from going too far. She would never die for him. But here, in this scene, they both die in a way. Soren takes it too far and Eleanor lets him. Why? Because his cruelty is saved for those he loves; a strange paradox that continually echoes around in their relationship. And it’s like an accident that you can’t look away from. It leaves one wondering, why so viscous? Whether a plot element, meant to show Soren’s state of mind while being separated from the Jesuits or because the author merely wants to one-up her readers, many of whom have probably experienced some impact play with a riding crop, only the author knows.

As Eleanor limps around on sore feet the next day in the book, I would have liked to have a magic pen and the ability to insert a comment or two from Soren or Eleanor. Either one of them could have simply, quietly, compassionately told the other that the misery stick was now a hard limit. They had tried it and would not try it again. Neither would give, both would still win, but not with that instrument. True growth, it is hardest in life and fiction. True, Eleanor has a massive change of heart at the end of the novel and Soren strives to get to know Nora in a way he never has before. I think perhaps the author got too engrossed in these last elements, although they are big, so I can hardly blame her.

I imagine many of the reviews of the Priest will start with “I love…. The best… Read it in one day…” Reisz is a fantastic author with a devoted fan base. She has a talent for dialogue that is second to none. The world she has created with Soren and Eleanor and Kingsley is intricate and complex and like real people her characters are both good and bad. For this reader though, at this moment, I find myself so disappointed in the characters of Soren and Eleanor. I want to be moved by the other true pinnacles of shock and surprise in the book. Maybe tomorrow. Maybe not. And the wait for my favorite continues.

Thanks for the ARC Netgalley and author Tiffany Reisz