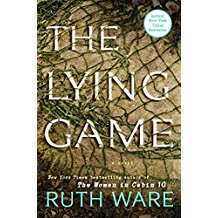 The Lying Game by Ruth Ware turned out to be better than I expected. I guess I had let some mediocre reviews cloud my impression before I even started the book.  So the book is about four girls at a boarding school in England and the dark secret that forces them apart and ultimately back together years later. Of course there is plenty of suspense, and the author is skilled at writing characters who are not necessarily honest with us as readers, or even themselves.  There are many themes in the novel- including love, honesty, and loyalty.  I have to say, unlike her previous novel, The Woman in Cabin 10, I feel, in my opinion, this one is focused/marketed to female readers, as it includes a lot of focus on a baby - as the main character Isa has an infant with her most of the story. That being said, the baby does come into play in the plot, and is important in terms of theme. It's just an opinion and of course others might feel different. Still, I found it quick and satisfying, a good read.